The mixture formed by charged (ionic) microgels in the presence of 1:1 added salt, with explicit consideration of a core-shell structure of the microgel particles, is studied. By solving numerically the three-component Ornstein-Zernike integral equations, the counter- and coion  penetration inside the microgel network and the resulting effective microgel-microgel electrostatic interaction are calculated. This is done in the limit of very low microgel concentration, so that the resulting pair-wise effective potential is not affected by many-body particle-particle interactions. The ion-ion, microgelion, and microgel-microgel correlations are all treated within the Hypernetted-Chain approximation. The results obtained clearly show that the addition of salt to the microgel suspension has a deep impact on the screening of the bare charge of the particles, confirming an already well-known result: the strong reduction of the effective charge of the microgel occurring even for diluted electrolyte concentrations. We show that this effect becomes more important as we increase the shell size of the particle and derive a semi-empirical model for the effective charge as a function of the electrolyte concentration and the shell extension. The resulting microgel-microgel effective pair po 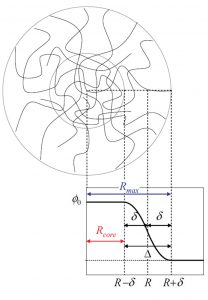 tential is analysed as a function of the shell extension and salt concentration. In all cases the interaction is a soft potential when particles overlap. For non-overlapping distances, our theoretical results indicate that microgel particles can be regarded as hard spherical colloids bearing an effective charge given by the net charge inside the particle and the microgel-microgel interaction shows a Yukawa-like behaviour as a function of the interparticle distance. It is also observed that increasing the bare-charge of the microgel induces a strong microgel-counterion coupling in the limit of very low electrolyte concentrations, which cannot be justified using linearized theories. This leads to an even more important adsorption of counterions inside the microgel network and to a reduction of the microgel-microgel effective repulsion.