Effective charge of ionic microgel particles in the swollen and collapsed states: The role of the steric microgel-ion repulsion

In this work the system formed by charged (ionic) microgels in the presence of monovalent salt is investigated by solving numerically the Ornstein-Zernike integral equations within the Hypernetted- Chain approximation. The ionic density profiles, effective interaction between microgel particles, and the effective charge of the particles are calculated. In addition to the electrostatic interaction, the excluded-volume repulsion between the microgel particle and the ions is also explicitly taken into account. Although this steric interaction is irrelevant in the swollen sta 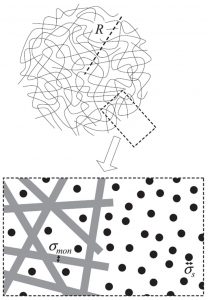 te (when the packing fraction of the polymer network is low), it becomes a very important contribution close to the de-swollen state, hindering the counterion penetration inside the microgel mesh. The theoretical predictions indicate that the ionic density profiles are strongly affected by the degree of swelling, going from a volumetric distribution of counterions in the swollen state to a surface accumulation outside the particle that becomes more important as the particle shrinks. The electrostatic effective interaction between pairs of microgel particles is shown to be the result of a complex interplay between electrostatic and depletion effects that strongly depend on the bare charge density of the particle. For sufficiently charged microgel particles, the steric exclusion leads to a less efficient screening of the microgelcharge near the de-swollen configuration, and so to a significant increase of the effective charge of the microgel particle.