Competition between excluded-volume and electrostatic interactions for nanogel swelling: effects of the counterion valence and nanogel charge

In this work the equilibrium distribution of ions around a thermo-responsive charged nanogel particle in an electrolyte aqueous suspension is explored using coarse-grained Monte Carlo computer simulations and the Ornstein–Zernike integral equation theory. We explicitly consider the ionic size in both methods and study the interplay between electrostatic and excluded-volume effects for swollen and shrunken nanogels, monovalent and trivalent counterions, and for two different nanogel charges. We find good quantitative agreement between the ionic density profiles obtained using both methods 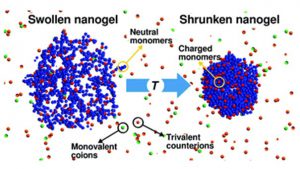 when the excluded repulsive force exerted by the cross-linked polymer network is taken into account. For the shrunken conformation, the electrostatic repulsion between the charged groups provokes a heterogeneous polymer density profile, leading to a nanogel structure with an internal low density hole surrounded by a dense corona. The results show that the excluded-volume repulsion strongly hinders the ion permeation for shrunken nanogels, where volume exclusion is able to significantly reduce the concentration of counterions in the more dense regions of the nanogel. In general, we demonstrate that the thermosensitive behaviour of nanogels, as well as their internal structure, is strongly influenced by the valence of the counterions and also by the charge of the particles. On the one hand, an increase of the counterion valence moves the swelling transition to lower temperatures, and induces a major structuring of the charged monomers into internal and external layers around the crown for shrunken nanogels. On the other hand, increasing the particle charge shifts the swelling curve to larger values of
the effective radius of the nanogel.