In this work we have performed a theoretical study of a system formed by ionic microgels in the presence of monovalent salt with the help of Ornstein–Zernike integral equations within the hypernetted-chain (HNC) approximation. We focus in particular on analysing the role that the short-range specific interactions between the polymer fibres of the microgel and the incoming ions have on the equilibrium ion distribution inside and outside the microgel. For this purpose, a theoretical model based on the equilibrium partitioning effect is developed to determine the interaction between the microgel particle
and a single ion. The results indicate that when counterions are specifically attracted to the polymer fibres of the microgel, an enhanced counterion accumulation occurs that induces the charge inversion of the microgel and a strong increase of the microgel net charge (or overcharging). In the case of coions, the specific attraction is also able to provoke the coion adsorption even though they are electrostatically repelled, and so increasing the microgel charge (true overcharging). Moreover, we show that ion adsorption onto the microgel particle is very different in swollen and shrunken states due to the competition between 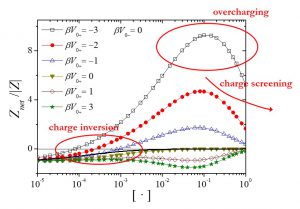 specific attraction and steric repulsion. In particular, ion adsorption occurs preferentially in the internal core of the particle for swollen states, whereas it is mainly concentrated in the external shell for de-swollen configurations. Finally, we observe the existence of a critical salt concentration, where the net charge of the microgels vanishes; above this inversion point the net charge of the microgels increases again, thus leading to reentrant stability of microgel suspensions.