Role of Steric Interactions on the Ionic Permeation Inside Charged Microgels

In this work, we study the effect of the steric excludedvolume interactions between counterions and thermoresponsive ionic heterogeneous microgel particles. With this aim, we perform Monte Carlo simulations to calculate the microgel effective net charge and the
conunterion distribution function inside and around the microgel for different degrees of swelling. These results are compared to the ones obtained solving the Ornstein−Zernike integral equations within the HNC approximation. For this purpose, the equilibrium polymer mass and charge distribution inside the micro 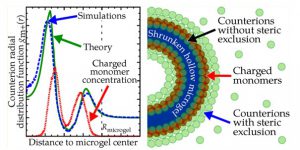 gel resulting from simulations are used as the input for the integral equations. Two different models are considered to quantify the microgel-ion steric interaction. The model that considers polymer fibers formed by spheres demonstrates to be a very reliable way to predict counterion permeation in such microgels. Finally, integral equations are solved ignoring the steric interaction as well, in order to determine to what extent this effect is playing a significant role. The comparison between both predictions allows us to conclude that the microgel-ion steric repulsion has relevant effects on the counterion permeation if the polymer volume fraction of the microgel is high enough, and that the integral equation theory is a powerful tool to quantitatively predict the local density profiles of ions inside and around the microgel, even in situations where the internal microgel charge and mass density are nonhomogeneous.