Irreversible adsorption of particles onto a flat surface as a consequence of sedimentation colloidal suspension has been studied by two simulation techniques: Brownian dynamics (BD) and stochastic rotation dynamics (SRD). The purpose of using both methods is to investigate the effect of hydrodynamic interactions on the adsorption kinetics and  on the structure of the first monolayer of sediment obtained 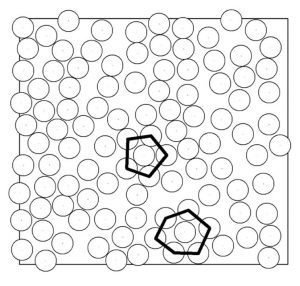 from the sedimentation of a concentrated and monodisperse colloidal suspension. Three systems were studied, characterised by the Péclet numbers: 0.1, 1.0 and 10. To physically understand the kinetic behaviour, simulation results were analysed using a kinetic model based on chemical reactions. High values of jamming limit (θ∞ > 0.61) were obtained for both simulation techniques, with the SRD showing the highest figures (0.631) due to the hydrodynamic effects that takes into account the fluid backflow produced by particle sedimentation. A two-step adsorption mechanism was proposed based on the observed kinetic behaviour.