A. Lasanta, Pablo I. Hurtado, A. Prados 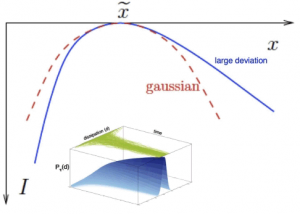 Understanding the physics of non-equilibrium systems remains as one of the major open questions in statistical physics. This problem can be partially handled by investigating macroscopic fluctuations of key magnitudes that characterise the non-equilibrium behaviour of the system of interest; their statistics, associated structures and microscopic origin. During the last years, some new general and powerful methods have appeared to delve into fluctuating behaviour that have drastically changed the way to address this problem in the realm of diffusive systems: macroscopic fluctuation theory (MFT) and a set of advanced computational techniques that make it possible to measure the probability of rare events. Notwithstanding, a satisfactory theory is still lacking in a particular case of intrinsically non-equilibrium systems, namely those in which energy is not conserved but dissipated continuously in the bulk of the system (e.g. granular media). In this work, we put forward the dissipated energy as a relevant quantity in this case and analyse in a pedagogical way its fluctuations, by making use of a suitable generalisation of macroscopic fluctuation theory to driven dissipative media.